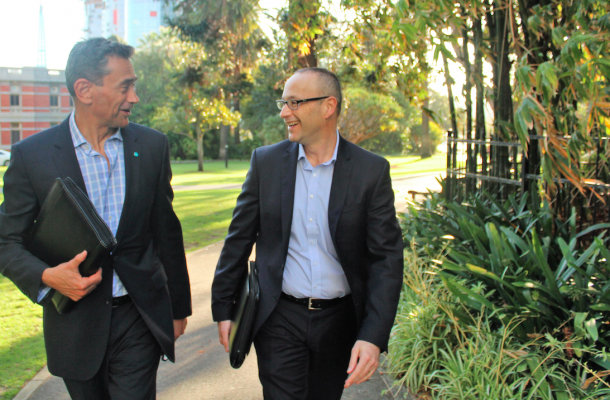 Handing over a business to the next generation might seem like something that can wait, but Australian business is largely unprepared for succession – and that’s a problem.Handover culture is the ingrained idea that a business needs to have a succession plan in place and somebody should be groomed to take over the leadership well in advance.

While that’s often a family member, handovers of a business could just as easily apply to staff, other executives or business colleagues.

Second Squared founders Ak Sabbagh and Lui Pangiarella say the culture of businesses being handed down from parent to child, or mentor to mentee, is far stronger overseas, in countries with long and storied histories like India in particular, where it’s been a part of their business culture from the beginning.

So why has handover culture bypassed Australia?

Mr Sabbagh says there any number of reasons – our youth as a nation, the she’ll-be-right attitude that makes up part of our national identity – but it might be based on our history.

“The Australia of 1788 onwards is a country that had to strike out on its own.”

“I think there’s an element of being a pioneer that plays into who we are and has formed a part of our attitudes.”

“Whatever the reason, Australian parents are much more likely to give us the opportunities and freedom to try a whole range of topics and interests when we’re young, rather than assume we’ll take over the family trade.”

“Outside of social attitudes, we just see this happen all the time in our capacity as business coaches and our roles as entrepreneurs within the business world.”

“90% of the businesses we deal with have not put any kind of handover in place to ensure the business will continue to be successful long after those at the top have gone.”

“And that’s a genuine economic concern – because if a handover doesn’t happen, those businesses are more likely than not to disappear. That hurts employment, that hurts economic growth, it affects people’s retirement and it hurts competition.”

Mr Pangiarella says that there are several steps any business can take to ensure they have a good handover in place:

Mr Sabbagh says the lack of handover culture is part of the reason he and Mr Pangiarella established Second Squared, which aims to give prospective business owners the tools and skills needed to take control of and grow a business.

Second Squared
Second Squared is a business ownership accelerator with a difference. Rather than focusing on new products or technology Second Squared is primarily focused on the core element of business success – the entrepreneur who wants to own an already established business.

Lui Pangiarella and Ak Sabbagh work with aspiring business owners to get clear on their ultimate goals, their passion and capability, fears, blind spots and gifts. They work with them to develop the skills to accelerate their process of finding and acquiring a business that is right for them and connect them to the necessary people and resources they need along the way.

Lui is an experienced facilitator, executive coach and company director with a focus on organisational performance, strategy, culture and leadership development.

Over his career Lui has had significant involvement in both buy-side and sell-side corporate in a range of industries covering transport and logistics, retail, chemical manufacturing, professional services, marine and civil engineering, laboratory services, subscription-based technology services, and for purpose organisations.

Lui has been featured in the media as a commentator on business and entrepreneurship, also regularly writing about changes and trends within the industry.  He is passionate about bringing new concepts and opportunities to the Australian industry.

As a business and executive coach for more than 10 years he has worked with small businesses to grow and ultimately position the owners for a successful handover to new owners.

He is a Chartered Accountant and a Graduate of the AICD Company Directors Course.

Ak is an experienced business owner and founder, board advisor, director, corporate and business coach. He plays a pivotal role in enabling leaders across a diverse range of sectors , transition their businesses to the next phase of development and achieve challenging commercial objectives.

His experience has led him to be invited as a keynote speaker on a variety of specialist topics including leadership and employee engagement, brand positioning, product and channel development, the role of the CEO, and growing the value of assets. Along with Mr Pangiarella, he is a commentator on business and entrepreneurship.

He is the founding President of the European Mentoring & Coaching Council (Asia Pacific Region), established in July 2018.

He is a graduate of the AICD Company Directors Course.

We work with searchers, investors, business owners and industry mentors, our specialised approach has allowed us to create and nurture the corporate eco-system in which search funds thrive.